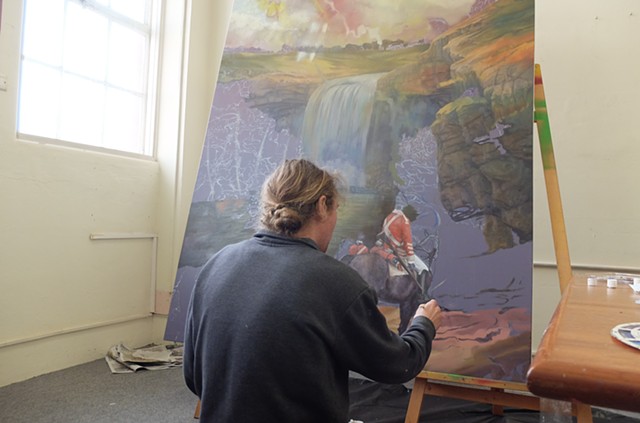 Jarrad Martyn (b. 1991) is an Australian artist based in Melbourne. His practice explores humanity’s relationship with the natural environment and how different historical events are framed. Through painting and drawing Martyn employs the principle of bricolage, something constructed from a diverse range of things, to collate academic research and its associated imagery to create an alternate conversation. Heavily relying on shifts between expected context and associated time periods, the contrasting motifs are used to explore the relationship between industry and the environment, species hierarchy, the conservation function of zoos, the evolution of collective memory, and the function of public monuments in modern society.

In Martyn’s work, the handling of paint is characterised by making adjustments to the opacity, texture, and clarity of the paint. The aim of which is to make the surface of the painting interesting and at times to hinder the representation of motifs. This in turn encouraging the audience to look longer, to deduce links between, and decipher their own conclusions as to what events are unfolding, and the symbolic meanings within.

Martyns’ work is in a number of public and private collections including the University of Western Australia, Edith Cowan University, Curtin University, City of Perth, City of Joondalup, Shire of Mundaring, and St John of God Hospital Art Collection. Martyn has been selected as a finalist in numerous national art awards, most significantly winning the John Stringer Art Prize (2018), the City of Joondalup Community Invitation Art Award Overall Acquisitive Award (2017) and the Fifty Squared Art Prize (2021) at the Brunswick Street Gallery.

Martyn’s practice also extends into the public sphere, being commissioned for a number of large-scale council and commercial murals. His work can be seen in the Shire of Collie (WA), Rochester (VIC), City of Fremantle (WA), City of Swan (WA), and the Newman Hotel in the Pilbara (WA), among others. Upcoming Exhibitions