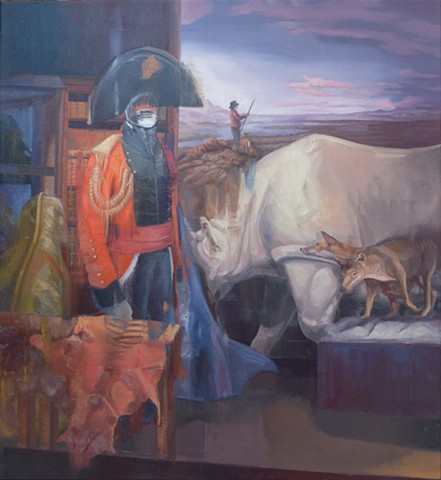 Blindfolded explores the relationship between humans and their engagement with the natural environment. Specifically, issues of colonialism, species extinction, and climate change are central to and explored in the work. Despite the oft picturesque representation of the natural landscape in the past (represented in Flat Circle through the appropriation of John Glover’s 1838 ‘Moulting Lagoon and Great Oyster Bay, from Pine Hill’), these landscapes are becoming rarer and less revered due to human exploitation. Blindfolded sees humans ignoring environmental and social issues of the present, depicted by the British Red Coat figure. The juxtaposition of motifs from different time periods encourages the audience to question the extent to which the human relationship with the environment has changed over time.

The extinct Thylacine is framed by taxidermy moulds of Lion, Blue Marlin, and Rhinoceros - species which are vulnerable and critically endangered primarily through human impact. Flat Circle questions whether these species will head in the same direction as the Thylacine and other animals that have become extinct. The work calls into question whether human priorities are still so heavily linked to a colonial framing of the landscape - where territories are to be used and exploited.

Prominently featured in the work is the British Red-Coat figure, the face of which is disfigured and appropriated from the 1946 Francis Bacon work ‘Painting’. Bacon’s work represents the human body as meat, and in Blindfolded calls into question the nature of species hierarchy, including humans in the classification. Not only this, but the use of Bacon’s distorted face anonymises the figure, and “his deathly complexion and toothy grimace suggest a deep brutality beneath his proper exterior” (MOMA, 2015). Anonymity can lead to inaction and no accountability, which represents the current state of climate policy and environmentalism as a whole.