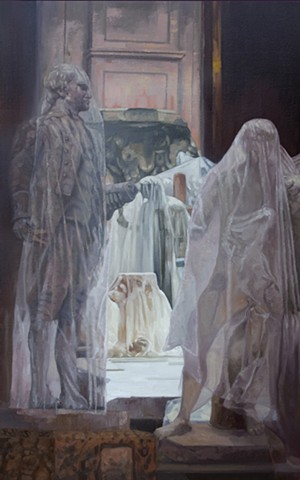 Available ‘Storage’ explores the evolution of collective memory, and the function of public monuments in modern society. As community members, our relationship with statues and monuments is in a constant state of change, due to the ever evolving nature of society. Recently, there has been a shift towards moral accountability and a re-examination of the achievements of memorialised figures. Specifically, former colonisers and forgotten diplomats have had their status questioned, a process that has been fused with social justice movements, particularly the Black Lives Matter protests, and simultaneous to the COVID19 pandemic.

‘Storage’ depicts a number of statues and monuments removed from their former public locations, repositioned into the context of museum storage - an archive. The dust covers and blankets obscure some of the monuments faces, representing the recent change in attitude to many of these historical figures depicted. Through the transparent veil the statue can be identified as Captain James Cook. Cook charted the east coast of Australia in 1770 for Great Britain. However, this time also marked the beginning of a relationship where two different cultures and knowledge systems came head to head. Recently, the damaged caused by Cook and associates to first nations people has been better acknowledged.

By representing these objects away from their usual public context, ‘Storage’ encourages the audience to recognise that representing these figures in new contexts can educate us, rather than continuing to conceal the unpleasant facts of the historical narratives that no longer serve us.