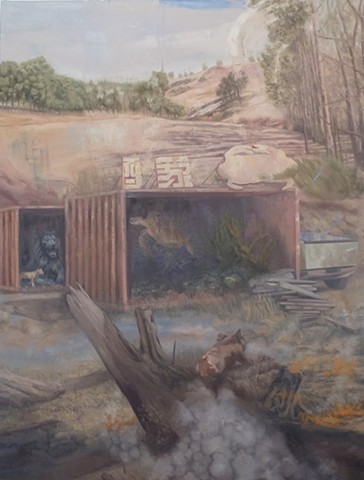 Available, exhibited at my 2020 solo show 'It is Not Down in Any Map; True Places Never Are', Stala Contemporary, Leederville, WA.

Force Your Hand explores the relationship between industry and the environment. The composition is largely made up of imagery from the former logging town Nannup (South Western Australian), the Cambodian port town, Sihanoukville, and Northern New South Wales towns recently affected by bushfires.

Two open freight containers sit in the middle of the composition, while the background features a large expansive landscape made up of rolling hills, dense trees and flat sky - Characteristics that are common with the Heidelberg School of Painting. These characteristics have historically been used to create a sense of myth and nationalism surrounding the representation of the landscape in painting. Force Your Hand represents and plays on these characteristics to question how we as humans are engaging with the landscape.

Isolated on a field of smoke, the meat-like animal form of a koala appears lost and unsure of its fate. The source image of the Koala is taken from media coverage of the recent fires across Australia. The vulnerable species is walking towards another species, the endangered Green Sea Turtle. As the climate warms the likelihood that the sex of the turtles eggs are female increases. The turtle is suspended in the freight, with the critically endangered Elk and Staghorn Horn Coral species situated behind it. By bringing these two species together, the composition hopes to engage discussion about the worthiness, and direction of our attention and activism.

The rear freight reveals a large lion sculpture, taken from Trafalgar Square, London, a symbol of British colonial rule, where landscapes were territories to be exploited. Alongside, a Thylacine appears at the base of the lion, a reminder of Australia's high extinction rate, as well as the finite nature of other natural resources.

This idea of treating the landscape as a territory to be taken from, is further reflected by the Chinese signage above the freight. The characters make up half the Chinese word for casino, and was sourced on a trip to Sihanoukville in Cambodia in September 2019. Having previously been to Sihanoukville in 2018, the increased construction, foreign investment and the effects of over-tourism have ‘destroyed’ the port town. The once pristine beaches have become polluted, waters are increasingly overfished, building waste from the 24 hour a day construction schedule litters the streets and traditional cultural practices are undermined by large foreign owned casinos. As one of Australia's major resource export partners, we are somewhat complicit in this engagement with the environment. Referencing this symbolic habitat, Force Your Hand reaffirms that economic prosperity should not be considered more valuable than the health of our ecosystems.