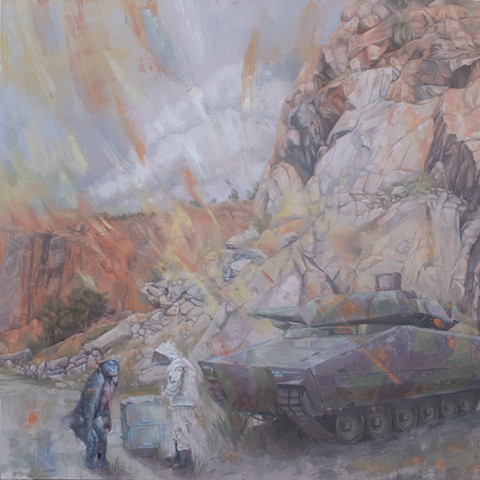 The painting GWS was made in response to the shark cull implemented by the Barnett government from 2014 to 2017, where baited drum lines were used in the vicinity of swimming beaches to capture and kill large sharks. The work depicts a dissected anatomical model of a life-size Great White Shark, and two bee-keepers who are attempting to load a torpedo into the shark.

Much of our collective terror and adjacent media representation of sharks has been in part due to the 1975 Steven Spielberg film ‘Jaws’. Our understanding of these animals and their vital role in our ocean ecosystem is disconnected from fact, often overly influenced by negative media stories.

The Type 53-65 torpedo was used by the former Soviet Union during the Cold War, a conflict with the USA defined by misinformation. The torpedo in GWS represents the media feeding the misinformation mythos of the story of sharks.

Bee-keepers are a recurring theme in my work for many reasons. The use of the bee-keepers in GWS is used to reflect an unfounded fear; and a note on the (potentially factually incorrect) statistic that you are more likely to die from a bee sting than be attacked by a shark.

GWS is set in Walton-on-the-Naze in Essex, England where I found several fossilised Sand Tiger Shark Teeth, that have been dated to be over 40 million years old. Displaying the teeth with the painting encourages a more scientific understanding, and encourages discussion about the above issues and themes.