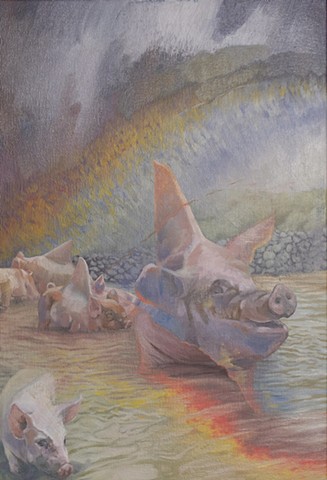 The oil painting Stallions was made in response to an article where Paul Watson, the head of Sea Sheppard stated that ‘pigs are eating more fish than sharks in the sea’. The article states that a third of all marine life that the fishing industry takes is called forage food, which is used to feed various livestock and pets. The article concerns how unsustainable commercial fishing is, being a significant contributing factor to climate change. The article made me think about animal based hierarchies,how we consider certain animals bad and others good. How culture can shape our understanding to a point where fact and fiction can become blurred. For example the shark is often the villain in movies and in the media, whereas the pig is often represented as greedy, lazy and or also made to appear much more cute than it is in reality.

The painting depicts a number of pigs with shark fins attached that are frolicking around in the mud. The palette is derived from some of the colours used in fish finding devices which bounce sonar off the bottom of the sea bed back to the boat to reveal where the fish are located. This work marked a change in trying to approach issues related to climate change that concerns how we are engaging with the environment.