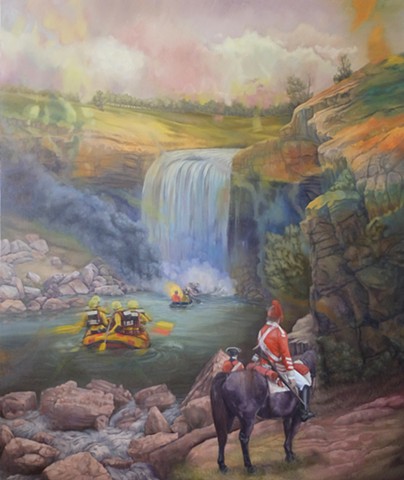 The oil painting Range explores the human impact on the natural environment during the anthropocene, the proposed epoch steaming from the Industrial Revolution marked by great change to the Earths geology and ecosystems. The setting for Range is the 1866 painting of Wannon Falls in Victoria by Russian artist Nicholas Chevallier. A boat of rescue workers are paddling towards a boat of hi vi’s wearing workers situated at the base of the waterfall. The imagery is taken from Cyclone Tasha which was a primary cause of the Brisbane floods from 2010-2011. Climate changes encompasses a number of consequences including extreme weather events resulting from a rise in temperature. The marks used to depict the rescue workers are characterised by a busyness to suggest a sense of motion, in contrast to the workers ahead who appear calm and oblivious to the fire rising from the boat. Positioned between the two boats is a giant mega fauna goanna called a Megalania and two 18th century British red coat soldiers. Their placement is symbolic and acknowledges the history of global warming, which has occurred both naturally and through human impact. The workers are about to be engulfed by the waterfall, like the Megalania which went extinct during the Pleistocene period as a result of both environmental changes and human hunting. The two solders contemplating the workers fate, reference the Industrial Revolution, which started in 1760, with the new manufacturing processes resulting from the burning of fossil fuels being the point of origin for the significant spike of CO2 levels into the atmosphere. The force of the water from the waterfall would keep the various mine and rescue workers in a state of limbo, never quite reaching each other, asking the question of how much human impact is sustainable while also acknowledging the past periods of natural warming and cooling of the landscape which have occurred during past epochs. The patches of colour spread across the composition are derived from a weather forecast map.Combined with the blurring and softening of paint a dream like space that slips in-between real and imagined is created, encouraging the audience to understand the significant role that time plays in understanding this framing of the landscape.